Home » My Thoughts on Soy Milk 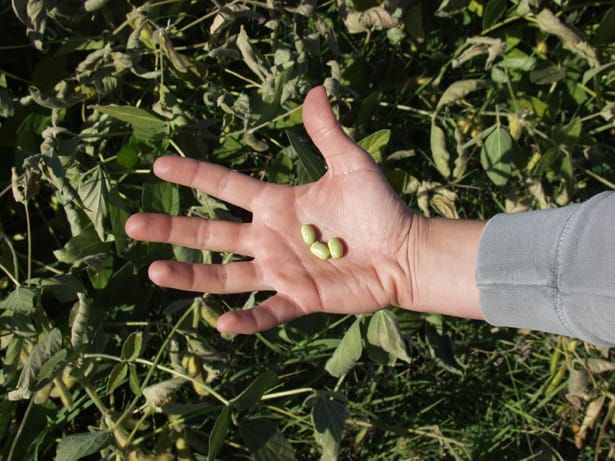 Last night I had a conversation with a friend about soy, and it really got me thinking. And I’ve been asked by many of my readers recently what my thoughts are on it. So I thought I’d try and get something written out and hopefully I don’t just talk (type?) in circles.

For years now soy (edamame, soy milk, tofu, textured vegetable protein) has really been touted as a health food. It’s been recommended as a milk and meat substitute, menopausal and infertile women have been told to drink it to help with hormones, and it’s even in baby formula. It’s cheap to grow and readily available so it’s also in a large majority of processed foods (soy lecithin) and its oil is one of the most used ‘cheap’ oils as well. It’s found in about 60% of the products you see in the supermarket! And I think if we all took a hard look at what we eat each day, we’d realize we eat quite a bit of soy. But should we be?

Three Strikes and You’re Out?

Phytoestrogen literally means “plant derived estrogen”. And these estrogens have been shown to reduce the activity of the natural estrogen in your body. Something you really don’t want to happen, and especially if you are dealing with a hormone imbalance already. It’s also been shown to cause the feminization of males as baby boys whose mothers ate a lot of soy products were found to have both smaller penis’s and/or problems with the development of them. So obviously it has some estrogenic effect, and estrogen dominance has also been linked to infertility in both males and females. In women it can inhibit conception by causing endometriosis and PCOS (poly cystic ovary syndrome) as well as decreasing libido. In men it has been linked to lowered sperm counts. Up to a 50% reduction in some cases.

I was able to find a couple studies done on the effects of soy and fertility and neither had great outcomes.

A report in The American Journal of Clinical Nutrition a few studies have actually shown that high levels of soy can increase menstrual cycle length, decrease the follicle-stimulating hormone and also decrease the leutinizing hormone. These studies were done with a 60mg of soy per day, the equivalent to three 12 oz glasses of soy milk.

Another study printed in The American Family Physician magazine (June 1996) states that, since the phytoestrogens in soy products increase the length of the follicular phase and lead to fewer menstrual cycles over a woman’s lifetime, it is possible that soy may decrease fertility in some women. They also added that women with multiple risk factors for infertility may be more sensitive to soy than others.

A study, by Jorge Chavarro at Harvard School of Public Health in Boston, on the effects of a man’s fertility has also been done and men who ate more than two portions of soy based food per week had a lower sperm count. On average they had about 41 million fewer sperm per 1 ml of semen than men who did not eat any soy based products. While this may not have an infertile impact on most men, men that already suffer from a low sperm count would be advised to stay away from it.

And from the Weston Price site;

Which leads us to….

The Weston A Price Foundation alleges that soy is not only high in phytic acid, but that the even when soaked (as other legumes are), that the phytic acid does not break down. This assumption would lead us to believe that consuming soy would then cause some nutrient loss within our bodies as the phytic acid binds to certain nutrients during digestion.

Since the introduction of genetically modified soybeans to the U.S. in 1992, up to 90% of the soy grown here, is actually genetically modified. If you don’t know what a genetically modified  organism is yet, here’s the gist: Basically scientists take DNA from different sources and combine them with the DNA of something like soy. (or corn, canola, cotton, etc.) This happens in part because a large seed corporation, Monsanto (who used to solely be a chemical corporation), would like to sell seeds that are “round up” ready. Meaning they inject certain DNA from organisms that will keep the plant alive even when sprayed with herbicides and pesticides.  I believe they have also found a way to combine the DNA from certain bugs (?) that allow the plant to contain pesticides itself. (I believe I watched that piece of info in the movie “The Botany of Desire” where they were talking about GMO potatoes at McDonalds – to which consumers had an issue with and farmers are no longer growing)

The problem with GMOs is that they have been placed in the market without thorough testing. And a lot of the studies that are coming out are not very pretty.

I also found an Australian study that came to the conclusion that GMO products may contribute to lowered fertility:

The Austrian scientists performed several long-term feeding trials with laboratory mice over a course of 20 weeks.

One of the studies was a so-called reproductive assessment by continuous breeding (RACB) trial, in which the same parent generation gave birth to several litters of baby mice.

The parents were fed either with a diet containing 33per cent of GM maize, a hybrid of Monsanto’s MON 810 and another variety, and a normal feed mix..

The team found changes that were ‘statistically significant’ in the third and fourth litters produced by the mice given a GM diet. There were fewer offspring, while the young mice were smaller.

Prof Zentek said there was a direct link between the changes seen and the GM diet.

A press release from the  Austrian Agency for Health and Nutrition, said the group of mice given a diet of genetically engineered corn saw a significant change in fertility.

Also, a quote from the WAP site

“The only human feeding study on GMOs ever conducted showed that genes “jumped” from GM soy into the DNA of human intestinal bacteria and continued to function. That means that long after you stop eating GM soy, you may still have GM proteins produced continuously inside of you. (What if the pesticide-producing “Bt” gene found in GM corn chips were also to jump? It might transform our intestinal flora into living pesticide factories—possibly for the long term.)”

The Verdict
Honestly, the verdict from ‘the man’ is still out on this one (I think mostly because a lot of people would lose a lot of money if it ever came about that soy was bad for you). The safety of soy and soy products has yet to be proven and I have a feeling it’s probably going to be one of those products, that 20 years from now, our kids are going to be wondering why in the world we consumed it.

Which is why I don’t eat it when possible.

Traditionally, soy has been consumed only in fermented forms (like miso and tempeh). Very, very different than how we eat it today. Soy in it’s natural form may be fine for your health (especially when fermented like traditional cultures did) but unfortunately we here in the west have started to put in into many, many, of our foods.  The processing the soy bean undergo is in no way healthy or natural, turning a once healthy food into, basically, junk food.

Where it Gets Sketchy….and Where I Begin To Talk in Circles

I hate to be one of those people that is so anti soy that I say it can never, ever be consumed. Some organizations are so anti soy (*ahem* Weston A Price People, among others) that sometimes it can look like a crazy conspiracy theory. But the “unfortunate for soy lovers aspect” is that there is scientific evidence to support the theory.

But will you die if you ingest a bit of soy?

The problem I see is that we regularly consume it in a very highly processed form in many processed foods. And any diet where we eat a lot of one type of food, isn’t good for us.

But I also tend to look at soy the same way I’d look at say, unsoaked wheat or unsoaked oats. Both contain levels of phytic acid. Both can be hard to digest. And both are regularly consumed.

So what would my recommendations be? Well….

And that all being said, I’m pretty anti-soy myself. {see – in circles folks. in circles}

So, what do you think about soy? Inform me.

For more in depth information on soy you can check out these resources:

Many of the links on this site are affiliate links, which mean that the owner of the site may earn a small commission from your purchase through the company. We will not recommend a company that we do not purchase from ourselves and we thank you for your support. No contributor or author on this site is a medical doctor and the statements made here have not been approved by the Food and Drug Administration. These statements are not intended to diagnose, treat or cure or prevent any disease. This notice is required by the Federal Food, Drug and Cosmetic Act. Read our privacy policy and full disclosure here.
You may also be interested in these posts from the same category.
Previous Post: « 10 Ways to Increase Fertility and Save Money
Next Post: Benefits of Coconut Oil »