Home » Could bread be the cause of your infertility?

Did you know that about 40% of all Americans are sensitive or allergic to the gluten found in wheat products? Many don’t even know it (because symptoms vary and it’s often not tested for). 1 out of 133 are severe enough to be labeled as celiac. And if you’ve been trying to get pregnant for some time and have yet to conceive, or have had multiple unexplained miscarriages, you may want to pay attention, because gluten and infertility are connected. 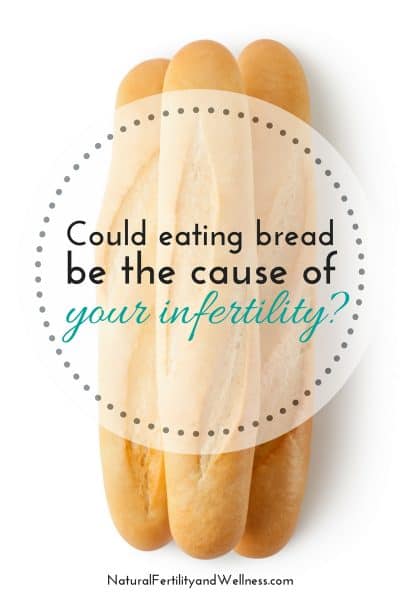 Gluten is a protein found in wheat, spelt, kamut, barley, and rye (it’s even in regular white bread – when I talk about “wheat”, this means any and all forms of the flour that come from the wheat grain – some people don’t realize that white bread is wheat bread, just the refined version of it). It helps bread dough to be elastic and causes it to maintain form as it rises. But one of the problems with gluten now is that it’s in everything!

We eat more wheat products now than ever in history because bread is so convenient due to mass production. Food manufacturers also add wheat and/or wheat gluten in a large majority of processed foods.

Another one of the other issues with our modern wheat bread is that it has been changed over the last century. We’ve become a society that loves nice fluffy bread and baked goods. To achieve this we’ve hybridized the actual wheat berry so that it now contains more of this gluten protein and we also add in more while baking to give it even more elasticity while rising.

The fact that the USDA food pyramid claims we need more wheat and grains than any other food group is also of great concern. (One of the other reasons that a lot of people do better off of wheat is that they are no longer experiencing the blood sugar issues associated with digesting bread, plus they are now eating more whole foods and not relying on packaged processed stuff!)

In people who are sensitive to gluten, the body actually attacks the lining of the intestine, damaging the gut wall and causing pain, diarrhea, constipation, and malabsorption of nutrients. This, often combined with the negative effects of antibiotic usage, too many sweets, and the lack of probiotic foods in our diet creates gut permeability – or the “leaking” of particles through the gut wall.

When these particles get into the bloodstream, they find their way around the body and “settle” in different areas. The body then attacks these particles and any other particles that look similar. This can cause a host of auto-immune issues as proteins and different particles of food can be similar to thyroid cells, pancreas cells, etc.

One of the biggest problems with gluten intolerance or gluten allergies is that there can be a long list of seemingly unrelated symptoms – and not all of them are specific to the gut!

People with celiac disease, a true wheat allergy, on average, suffer for about 7 years before a diagnosis is made. And their intestinal wall is constantly being damaged during that time.

Our story with gluten

Last February, while doing some research for a blog post, I stumbled across an article about gluten that made me think my husband’s health may change for the better if he went gluten-free. After convincing him to give it a try I started cooking completely gluten-free for him while retaining just a small amount of wheat products in my and my son’s diet.

The first week or so was tough as not only did we have to get used to eating completely different, he started to experience withdrawal/detox symptoms and some pretty bad headaches. A couple of weeks went by and he started to notice he felt better. And not just the things we thought would get better! He started sleeping better through the night and he wasn’t as sore and tired as he had been previously. After about 3 months he decided to try a bit of bread to see what happened. And boy did he find out! He got headaches for 3 days, muscle pains and aches, and stomach upset. It was clear he was sensitive to gluten.

A year later his body has healed enough where he can tolerate a small amount of wheat and normally only in the form of spelt. We spent 5 years completely gluten-free. We currently do eat a “low-gluten” diet most of the time and try to make most of our wheat products at home with the process of sourdough.

Melissa Diane Smith, author of “Going Against the Grain” has been stated as saying that the leading cause of recurrent miscarriage is undiagnosed gluten sensitivity. She also said that 85% of her PCOS clients showed positive for it as well. (It is also been shown to have a direct correlation with Endometriosis) Men are not immune to infertility due to celiac either as they may also suffer from unexplained infertility.

In a 2011 study of 188 women dealing with infertility, they found at 5.9% of them had undiagnosed celiac. (They all went on to conceive within one year of dietary changes!)

So how does gluten specifically affect fertility?

One of the theories is that the damage to the intestinal wall can lead to a lot of nutrient malabsorption. When the intestines can’t properly absorb nutrients like zinc, selenium, iron, Vitamin D…it leads to lowered hormone production and those hormones often don’t get signaled at the right time.

Malabsorption basically leads to the body not being fed what it needs in order to produce the right amounts of hormones needed for conception or to bring a pregnancy to term.

There is also the fact that celiac is an autoimmune disease meaning that the immune system begins to attack parts of your body, which can be anything from your thyroid to the pancreas, to even the placental tissue.

Gluten may also cause inflammation in the body. This inflammation sends the signal that the body is in danger. Your body then, being very intelligent, will focus on what it needs for survival – and reproduction is not necessary for your survival.

Testing for gluten allergies and intolerance

If you think you have a gluten sensitivity, your doctor can run a blood test called an IgA to see if you have certain antibodies specific to celiac. It’s not 100% though and may not offer a wide enough view, so your symptoms must also be looked at and taken into consideration if it comes back negative!

There is also the issue that if you don’t have full-blown celiac, but are still “intolerant” to gluten, the tests won’t show it. If that happens to be the case, I do know that holistic doctors out there have different tests they use, everything from using kinesiology to running an IgG lab.

Alternatively, you could also try going gluten-free for a couple of months! (It takes at least a few weeks for the effects of the wheat to get out of your system, so one week just isn’t long enough) Watch for symptoms when you cut it out, and if you, in fact, have an intolerance to it, you’ll notice when you eat something with gluten in it after a month or so. And even if you haven’t had a positive diagnosis, your health care professional can help you figure out what a gluten-free diet may look like for you.

Going gluten-free can be tough – I won’t lie to you. But it can also be very worth it in the end! There are now a lot of different resources both online and in print which does make it easier, but gluten-free living is a total switch from a normal American diet. Gluten is used in a lot of processed foods and you really have to start reading the labels, and if you truly have celiac, that means replacing things like your toaster and cutting boards.

You also need to make sure that you’re not just looking for substitutes for your normal fare! Gluten-free eating can be just as unhealthy if you constantly buy products that are full of other ingredients (bad fats, sugar, stabilizers) that help get the texture close to wheat. My advice would be to also research a primal or paleo diet and equip yourself with recipes from them so that you can cut out your bread and bread substitutes. Simply put the focus on foods that are already gluten-free!

Since it would take a book to write all there is to know about gluten sensitivities, here are a few other resources for you.

My friend Michele, over at Frugal Granola, actually found out (herself!) that she had celiac. This was after she had multiple miscarriages and other health issues. Though not online much anymore, her site has some great information and gluten-free recipes. She was the one whose brain I picked constantly while making the switch to Gluten Free eating last year.

We also did a week-long series on gluten last fall :