A lot of people remember how they felt and who they were before they got sick.  Sickness, for them, is a line in the sand, a demarcation, a definitive “there” and “here” signifying what life was pre- illness and what life has become since.  I never had that clear distinction, only because I never had a “before”.  I had always felt sick, my whole little life, and even as a child. Healing Hashimoto’s gave me a life back that I didn’t know I was missing.

Although I had never known what healthy and good were like, I knew I had never experienced them; there always seemed to be something that felt wrong with my body.  And maybe in a way, that’s good because I had nothing to mourn or say how beautiful something once was; wrongness was simply all I knew.

I was the kid who missed every field trip — every single one — because I had another ear infection, or because I was on my second bout of Strep throat for the school year.  I was the child who went home from school the most, either because I was dizzy or because I had a fever or because my stomach hurt again.  Which, of course, all warranted antibiotics; over and over again, so many I could never keep track.

In high school, I adopted a low-fat diet, for which I was praised and honored for my diligence and “healthiness”.  I stopped eating protein because it no longer tasted good to me, and ate all the foods that called to me: pasta, bread, grains, dairy, sweet tea, and diet coke.  Eventually I got “smart” and moved away from all that sugar (syrupy sweet iced tea was my favorite) and started using artificial sweeteners instead.  The closest I got to buying organic was organic macaroni and cheese box mixes from the specialty goods store, not because they were healthy but because they were trendy and made a statement.

It wasn’t until my last month of university right before graduation — between the 60-pound weight gain, heart palpitations, depression, joint and muscle pain/cramps, frequent thirst and urination, daily sore throats, intolerance to heat, hives, racing pulse, fatigue so bad that my afternoon nap began right after breakfast and practically ended before dinner — that I was awarded an official diagnosis, a recognition that someone else (a campus doctor) thought there was something wrong with me too: Hypothyroidism.  “Take the medication I’m giving you and in two months, you’ll be back to normal” he said.

Two months later, a change of scenery — a move from Orlando to Brooklyn — and a world full of opportunity later, a walk-in clinic nurse informed me I actually had something called Hashimoto’s; “Did [I] know that?” she said.  In short, hell no.  But the metaphor — my body attacking my body — was just too spot-on poignant.

I was living on coffee and diet coke just to stay awake (it helped to stave off the “I just had a lobotomy” sensation) and OTC sleeping pills to actually fall asleep.  I craved sugar and carbs like there was no tomorrow, and ice cream comas were becoming a regular occurrence.  It was January in New York at the time, and I sat slumped over on my couch, the falling snow a reminder of winter just beyond the window.  I was deep in the throes of depression, my cell phone in hand, utterly hopeless, knowing there was a way to get better, yet no doctor could give me any direction.  I used my cellphone to Google a few of my symptoms that were troubling me the most and landed on something called Candida — a funny word which meant my entire system had been hijacked by a fungus.  Not pleasant, but it certainly made sense: my immune system was reacting to the pathogen and pulling down my thyroid along with it.  I ran to a bookstore and picked up The Yeast Connection and Women’s Health (available on Amazon), a bible of sorts, and read the entire book in a matter of hours.  I knew this is what was wrong with me.  It’s not pretty but I had one big, fat (systemic) yeast infection. 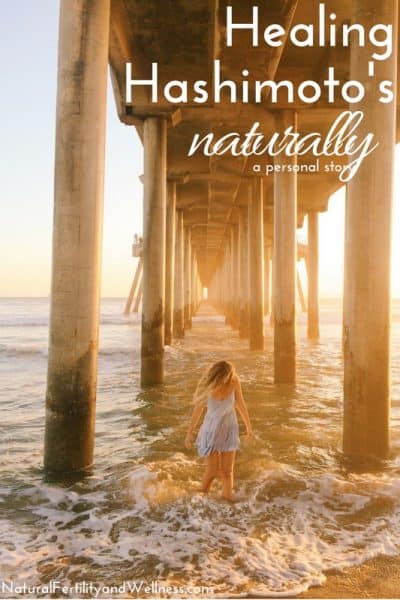 I started an anti-Candida diet that winter and four months later, my thyroid numbers were surprisingly better, so much so that my medication dose got reduced. This trend continued for the next few months until I hit a plateau and realized I was missing a few things. I so valued the work that Dr. William Crook had done for me in writing The Yeast Connection And Women’s Health, but, with time, started to see that I needed to eliminate food allergens; that they were causing this fungal infection and all of my symptoms. There’s much more to this food story, of course: I did a bunch of research and trial and error and finally figured out what my body needed and what I had to avoid. It turned out to be a long and transient list and a whole new world of information.  Mostly, I realized that the food I had been eating wasn’t food at all, it was industrial product; I learned what real food looked like and that fats were actually good and necessary for life. I learned that bacteria were my friend and I had to stop sanitizing my body, my emotions, my food. In short, I learned that everything I had ever known about eating was wrong; it was simply too modern for my own good.

About one year later, my thyroid improved so much that I was weaned off of my medication. I no longer had any evidence of Hashimoto’s Thyroiditis.  My doctor told me he didn’t believe I had done this myself (it was “spontaneous” according to him) — it was “possible, but highly improbable” and that he liked to see empirical evidence; “published work, you know”. I was in total unmedicaded remission, much to my doctor’s dismay. Years later, I still am. I did this all from intuition. Something inside of me knew this disease would be passing. I had no reassurance from anyone or anything other than this drive inside me to work as hard as I could. I was even working against a family history of thyroid disease and autoimmunity. In my case, my hard work paid off.  I found my own way into the world of Functional Medicine, before I even knew it had a name. I learned to find the cause, instead of treating the symptom.  I also learned that medications don’t heal, even though there are a lot of companies and agencies working hard to make us think otherwise.  I learned that medical independence and true health is possible, and along with them come personal growth and mental clarity. I stopped supporting the fallacy of the permanence of modern chronic illness.

Because I had success healing my Hashimoto’s thyroid disease, I started sharing my experience with other people in similar situations via health writing. Quickly, I realized I needed to put my expertise and insatiable curiosity to good use, and enrolled in formal nutrition school at the Institute for Integrative Nutrition. I now work as a Holistic Health Counselor, guiding people to heal their symptoms and causes of thyroid disease, autoimmunity, Candida overgrowth, and food allergies. I empower my clients to live their best lives, overcome fear and limitations, and live out their unique purpose in this world.

In working with my clients, I find that they also inherently understand that they can heal their diseases: they are always fighting and working hard and researching; they know that they shouldn’t feel this way and that there has to be an answer to their dilemma. Even those who are not interested in natural health understand that this isn’t the way things should be for them and that there simply has to be a solution. My job is provide these people with all of the information, guidance, support, and care they need to overcome their illness in the form of listening and action plans. My work is very important to me because this is a calling, not a job. Guiding people to medical independence, true health, and ultimately, fulfillment and happiness isn’t something that can be done in a doctor’s office.

And I would know.

Liz Schau is a Holistic Health Counselor and Health Writer who helps those with thyroid disease, autoimmunity, Candida, and food allergies overcome their health problems and embrace radical wellness. She’s always looking for motivated and intelligent clients. You can find her at lizschau.com.