I asked Drew to guest post today as I’ve heard multiple times from people I know, how TCM and acupuncture have been helpful in their journey to healing the thyroid. For those who have struggling with thyroid health and unable to overcome their issues through just diet and lifestyle changes, TCM may be helpful in your healing.

Thyroid conditions affect an estimated 200 million people worldwide, many of whom may go undiagnosed. As a Practitioner of Traditional Chinese Medicine (TCMP) who works in the field of natural fertility enhancement, I often see people suffering from thyroid symptoms (i.e. hypothyroidism can lead to miscarriage). In this article, I will go over the basics of the most common thyroid conditions as well as how they are interpreted and treated from a TCM perspective.

From a Chinese medicine point of view, hyperthyroidism is often referred to as the “hot” type and is often grouped into the “Yin deficiency” or “Empty Heat” category in Chinese medicine. Yin is the cooling, moistening element in TCM (as opposed to Yang which is warming). When someone is deficient in Yin, sufferers therefore experience a relative excess of heat (see chart #1 below). This excess in heat can create symptoms such as:

To treat Yin deficiency type hyperthyroidism, a practitioner must nourish Yin with the use of acupuncture, foods and most importantly, herbal medicine. A common Chinese medicine formula to tonify Yin is called “Six Ingredient Pill with Rehmannia” or “Liu Wei Di Huang Wan”. 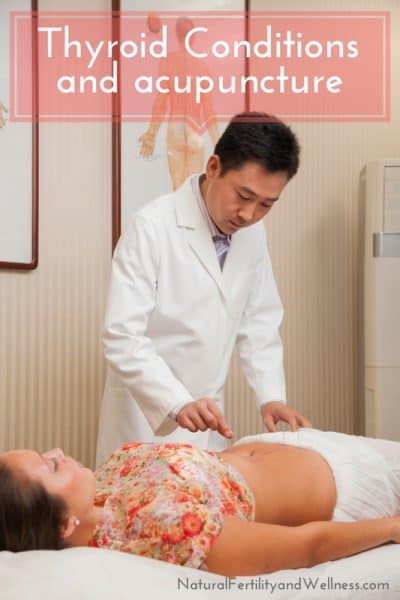 On the other end of the thyroid spectrum is the more commonly known hypothyroidism. This is more commonly seen in my fertility practise than hyperthyroidism and in my opinion, often goes undiagnosed. People can suffer for years with what is called sub-clinical hypothyroidism which is when your blood work appears in the normal range yet you still seem to exhibit typical symptoms of hypothyroidism. Since your blood work is normal, you generally do not receive treatment – often leaving people frustrated and looking for alternatives.

First, let’s look at some of the more familiar symptoms of hypothyroidism:

In chart #2, you will notice that with hypothyroidism, there is a deficiency in the Yang energy which creates a relative excess of Yin – resulting in more “cold” associated symptoms, also referred to as a “Yang Deficiency” or “Empty Cold”. Yang energy is the hotter, faster energy when compared to Yin and when one is deficient in Yang, body processes tend to slow down and feel colder.

To treat the Yang deficient type of hypothyroidism, a TCM practitioner would use warming herbs such as cinnamon bark and aconite as well as acupuncture with the help of moxibustion (the burning of the herb mugwort on or around acupuncture points). As always, diet and supplement suggestions are essential.

A recent Russian study (September 2011) examined the effects of acupuncture and other TCM therapies on subclinical thyroid syndrome and discovered that TSH levels were reduced to normal levels in 74% of the treatment group. It went on to conclude that acupuncture could be an alternative to substitution therapy in subclinical hypothyroidism. More participants in future studies would make these finding more significant but the results are certainly encouraging.

In summary, most people with hypothyroidism are in need of more Yang (warming) energy and most people who suffer from hyperthyroidism need more Yin (cooling) energy. Clinically, we often see a mixture of the two in the one individual and it’s up to a seasoned practitioner to decide the best course of treatment.

Don’t let the often mysterious language of TCM stop you from considering this growing healthcare profession…particularly when it comes to your thyroid health. Consult with an experienced TCM practitioner and see if your thyroid condition is the “hot” type or the “cold” type and start feeling better today.

Drew Nesbitt is a Practitioner of Traditional Chinese Medicine (TCMP) and a Nutritional Consultant in Toronto, Ontario who specializes in natural fertility enhancement for both men and women. Visit www.drewnesbitt.ca for more information today.

You may also be interested in these posts from the same category.
Previous Post: « Why Do I Still Have Thyroid Symptoms?
Next Post: Gluten free sourdough pancakes