I’ve read a blog post here and there where someone decides to feed an animal both conventional corn(which is most likely GMO) and organic corn. And the animals ALWAYS choose the organic. It’s such an awesome concept – that even the animals can tell the difference between to two! I’m not a supporter of genetically modified foods in any way shape or form and avoid them as often as I can. My husband and I even got into a discussion about it with a farmer at church – ended up leaving it as “we’ll agree to disagree”.

But I’m not one to take “studies” seriously. They really don’t mean a lot most of the time and everyone has their own bias and wanting different outcomes. The interesting part about people trying this themselves was that it normally showed a big difference in preference.

So of course I had to try it myself! 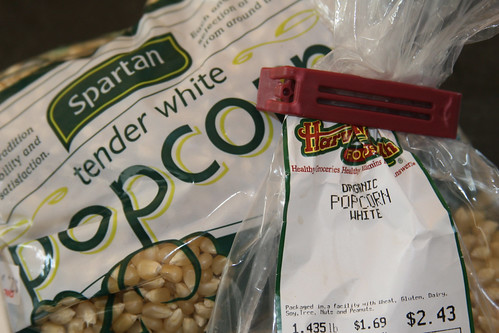 A couple of months ago I grabbed some of my organic popcorn and picked up some regular popcorn at the store as well. Now, it’s not labeled GMO, because unfortunately it’s not required by law for companies to tell us when we’re eating something that’s been modified by scientists. But it’s pretty much assumed that since corn is so highly modified in the US, that if you don’t buy organic, it’s a really good chance it’s had its genes messed with.

I’ve got four laying hens outside (love my girls!) as well as troves of wildlife in the woods right behind my house. So I knew I’d have pretty good subjects. After popping the corn, I made sure to keep it in separate bowls and marked the bottom of the bowls. 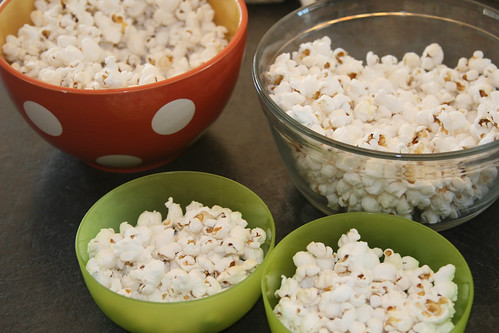 Test #1 – I placed a half cup of popcorn on paper plates and put them right next to each other in the chicken pen, before I let them out in the morning. The hens were hungry! So hungry in fact that they ran right over the popcorn plates to get to me and it went flying everywhere! I had to go back in and dump the plates on to the ground so they could just eat the popcorn off the dirt.

Fine. Eat off the ground already.

Outcome – 3 hens ate the conventional first, only one went for the organic. huh. 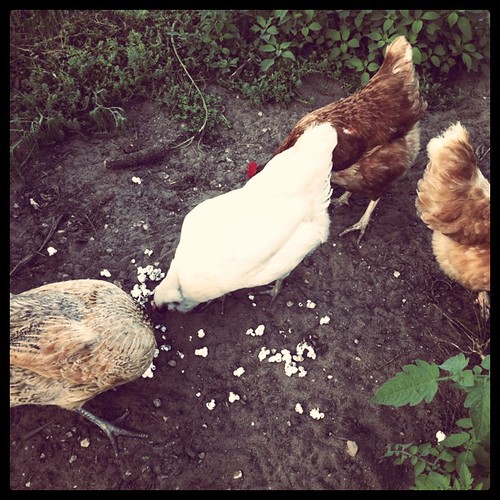 I also placed two bowls out in the woods to see what the wildlife might do. 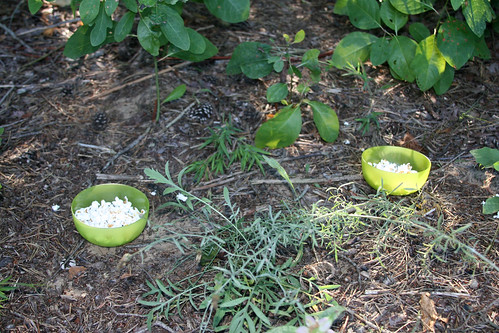 Test #2 – Later that day I went out and fed the hens again. This time I learned my lesson and just dumped the popcorn on the ground already.

Outcome – Again 3 of my girls took to the conventional first, and only 1 at the organic pile. Seriously……? Do I have only one smart hen? 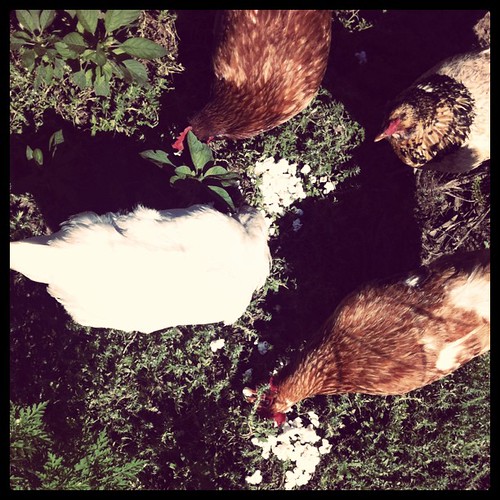 The wildlife had yet to eat their popcorn.

Test #3 – So far I’m getting kind of annoyed that this test isn’t going the way I’d planned. Is it because my hens are used to conventional corn? (I don’t always buy organic feed) or is the popcorn not genetically modified? 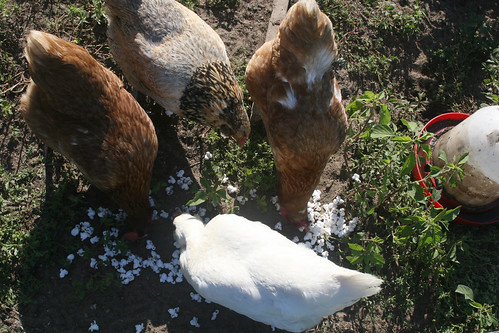 The wildlife still had not touched theirs.

At this point I was getting bored with the whole experiment. For every test they basically just ate whatever was closest to them and went from one pile to the next. Watching them I couldn’t see any of them have preference over one type of corn. I ended up just dumping the almost stale popcorn into the pen later that night and this was the only time more of them went for the organic pile first. But then went back and forth between the piles like they had earlier. The next day both bowls in the woods were exactly half gone. Later that day both bowls were empty.

So here I was hoping to be able to tell you that even my lowly chickens knew the difference between good food and bad……and I couldn’t!

What I still believe though is that we probably shouldn’t mess with what God designed. I can only think that if he wanted DNA from a salmon in a vegetable he would have put it there to begin with!

Has anyone ever tried this? What was your outcome?