It’s no secret that I’ve struggled with fatigue from time to time, some months worse than others. But I’ve always been able to right myself again within a few months and get my energy and drive back.

Almost two years ago I started working with a chiropractor friend of mine because it had gone on for over 6 months and I was tired of being tired and was unable to fix it myself. We supplemented my diet, I stayed away from sugar, nourished my body with food, and I rested as much as possible for a month or so. I definitely made a comeback: my energy was back, I was able to start working out again, my inner drive was there. It was great.

And then I got pregnant. And miscarried.

Man, has it been a rough comeback for me, and I’m still not there.

I ended up seeing a naturopath who I worked with to help a weak thyroid (diagnosed via nutritional response testing), but months later I was still feeling… down. Yet I knew my body takes its sweet time balancing out; every pregnancy has been followed by the same cycles which finally get on track by about 6 months after weaning.

We kind of figured this time would be no different.

Many months went by and I was gentle with my body, giving it nourishment and supplementation and rest. Then we hit the 8 month mark post miscarriage and things were not right.

My ambition to get out of bed in the morning was gone, I struggle just to make it through each day. Foggy thinking was becoming my normal and the type A person I was many years ago had long been forgotten.

I’ve been depressed before and this just doesn’t feel like that. I wasn’t/am not hopeless, I love my life, and yet I am just so freaking tired I can’t get anything done. Or think straight.

Anxiety took hold of me after our loss like never before. And it wouldn’t let go. I began waking up at night and not being able to go back to sleep many times each week. Which I thought attributed to my tiredness, but even when sleeping a full eight hours, I still didn’t want to get out of bed. It was literally like first trimester tiredness has been hanging on; walking up the stairs even felt like work.

And the 10 pounds I gained during that pregnancy didn’t move either, something I’ve not yet had a problem with. 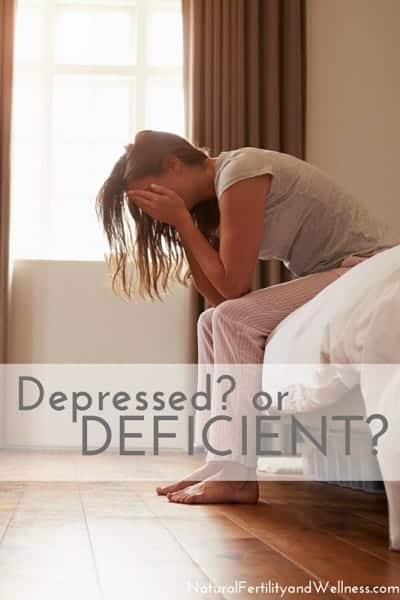 So I made the decision over the summer to see my OB, and called to make the yearly “girly” exam appointment where I was going to ask for a full thyroid panel and vitamin D labs to be run. I had to schedule 8 weeks out, and by then…..let’s just say I had to call and cancel the day before. “Girl stuff” happened.

Figured I’d go see my MD and get in sooner as I’d have to wait another 7 weeks for the OB. Nope, just another 6 weeks and then his office called to cancel on the day of my appointment because he was sick.

So I finally just made an appointment with a holistic DO in town (because I could get in that week and had wanted to see someone natural minded anyway) and paid out the wazoo. But at least the labs were done! And it was great to talk to someone who was an advocate for natural health; she even knew who Weston A Price was.

When I first got my results, I was slightly bummed because I felt like I didn’t have any definitive answers about what was going on with my physical health. But the more I looked at them, and the more I read up on different numbers and symptoms, the more I realized that it is the reason I’ve felt so crappy.

Over the last couple of weeks, I’ve spent many hours reading up on these specific vitamin deficiencies and realized that I’ve probably been dealing with them since I was young. And that while eating a whole foods diet has helped in many ways, there is still some work to be done! I’m also now a big believer that a traumatic life experience can in fact change your body physically.

I’ve also made changes in my diet, hoping to get this all figured out sooner rather than later, and I can’t wait to start talking about what I’m doing. Though getting my energy back is not a quick fix, so bear with me.

Have any of you dealt with vitamin deficiencies? How were you able to heal your body?

Many of the links on this site are affiliate links, which mean that the owner of the site may earn a small commission from your purchase through the company. We will not recommend a company that we do not purchase from ourselves and we thank you for your support. No contributor or author on this site is a medical doctor and the statements made here have not been approved by the Food and Drug Administration. These statements are not intended to diagnose, treat or cure or prevent any disease. This notice is required by the Federal Food, Drug and Cosmetic Act. Read our privacy policy and full disclosure here.
You may also be interested in these posts from the same category.
Previous Post: « Our Culture and a Woman’s Cycle
Next Post: Autoimmune, the cause and the cure »